Help Others in Their Spiritual Journey

Recognized as one of the finest metaphysical schools in the world, public contributions allow us to publish ground-breaking spiritual books, establish and sustain life-changing metaphysical workshops, training programs and retreats at affordable tuitions. Through donations, we offer scholarships to provide short-term or sustained support for new and ongoing dedicated students.
With so many sincere seekers on the spiritual path, the demand for effective high quality spiritual education has never been greater. As a 501(c)(3), Spiritual Arts Institute depends on public support to carry out its mission to helping souls reach their highest spiritual potential.

Please support the Institute in its education, publishing and mission work now through January 2023. 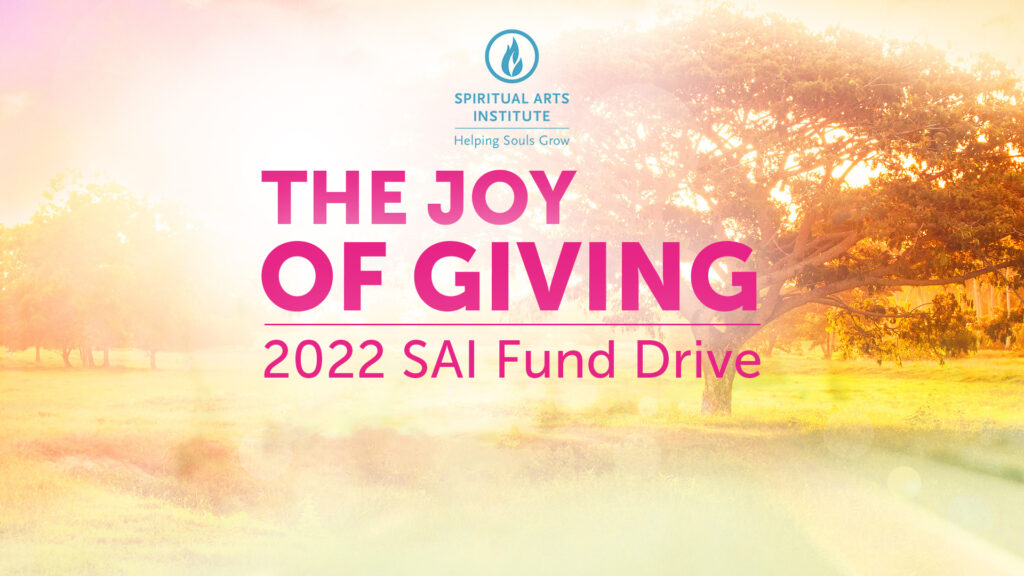 Our staff is available and ready to accept and process donations seamlessly over the phone. Give us a call today and contribute to our family.
1 (800) 650-2872

Use the list below to help you make a decision on your donation. If you have a question or comment that’s not covered in the list, please contact us and we’ll be able to help you.
Contact Us
How Much to Give
According to Independent Sector’s recent study, Giving and Volunteering in the United States, 89% of American households give to charity. The average gift is about 3.2% of income (before taxes), which is an increase from previous years but still well below the 10% tithing recommended by religious institutions. The average household donates $1,620 each year, a little more than four dollars a day. Based on a survey of more than 4,000 adults, this series of reports explored “the why, how, and who behind the extraordinary everyday generosity – both in time and money – of American households.” It revealed that the people who give the most actually make the least. Households earning under $10,000 a year — far below the poverty line — gave 5.2% of their income to charity. While 3.2% is the average, there is a movement to give more. Independent Sector encourages donors to “Give 5” – donate 5% of personal income to charitable organizations.
Making a Long-Term Commitment
Charitynavigator.org recommends thinking of philanthropic activity as a long-term commitment, more akin to marriage than dating. Intelligent giving is motivated by altruism, knowledge, and perspective. Whereas diversification is the key to reducing risk when it comes to financial investments, the opposite is true for philanthropic investments. If you have taken the time to identify a well-run nonprofit that is engaged in a cause that you are passionate about, you should then feel confident in giving it your financial support. When you contribute long-term, your support is there through good times and bad. In this way, genuine sustainable development takes place. You become an investor in the health and welfare of the organization you are supporting.
Every Dollar Counts
Nonprofit organizations depend on the support of a wide variety of people to conduct their charitable activities.
Budget for Giving
Plan your philanthropic activities right into your budget just as you would other financial obligations.
Be a Proactive Giver
You do not have to wait to be asked. Plan a giving strategy in advance.
Consider Alternative Forms of Giving
Do not overlook the benefits to you and your cause received from bequests, charitable gift annuities, gifts in kind, endowments and many other creative forms of giving.

Questions about making a donation and how you can support us? See below or please contact us and we’ll be able to help you.
Contact Us
Is donating online secure?
Absolutely. Our website is SSL certified and all our transactions are encrypted and processed through Authorize.net which utilizes the latest technology and procedures for protection.
How will I receive confirmation that my online donation has been processed?
Once your donation has been processed, Spiritual Arts Institute will email you a confirming receipt valid for tax deductible purposes. Please save this for your records.
What if I wish to send a check instead of using a credit card?

We welcome your donation by check as it saves us the 3% credit card processing fee. Please make sure the check is cashable in US dollars and made payable to: Spiritual Arts Institute, 527 Encinitas Boulevard, Suite 206
Encinitas, CA 92024

How do I know where my contribution is going?
Donations to Spiritual Arts Institute are unrestricted and are applied where there is the greatest need. Through our newsletters, emails and website, we will keep you up-to-date on exactly what we are doing with your donation dollars and how you are helping others in their spiritual journey.
How does Spiritual Arts Institute protect my privacy?
We do not sell, rent, or trade your personal information to any other party. Your donation to Spiritual Arts Institute is anonymous unless you wish your name to be credited with your donation.
Can I make a donation by phone?
Yes, please call 1.800.650.AURA (2872).
Is there a minimum donation amount?
No, we are delighted to accept gifts in any amount.
What if I have difficulty making an online donation?
If you have any difficulty in making your donation online, please contact us at 1.800.650.AURA (2872).
Can I cancel a donation already made to Spiritual Arts Institute?
Donations are nonrefundable. However, if any error appears on your credit card please call us immediately. Recurring monthly contribution plans can be canceled at any time.