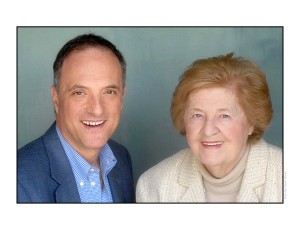 After many years of offering classes in metaphysics on her own, Barbara found a dedicated student who became her collaborator and director of Spiritual Arts Institute (SAI). While Barbara has been a recognized spiritual teacher for many years, Dimitri has now emerged as a teacher of The Kingdom of Light Teachings ™. In this second interview, I wanted to know more about their collaboration.

Adriana: Hello Barbara and Dimitri, it is a pleasure to talk more about these exciting teachings that both of you are offering through SAI. Let’s begin by asking Barbara, how did you begin your career in these marvelous teachings?

A: You’ve been teaching on the aura and many other metaphysical topics for years, yet it is now that you are sharing the nature of these teachings. What prompted you to start sharing the name of this wisdom–The Kingdom of Light Teachings™ ?

A: You have worked with Dimitri for many years and I know that you shared many interests in common including writing three extraordinary books together, but when did you know that Dimitri was meant to teach this work as well?

A: Have you always been in agreement in regards as to who does what?

A: Is there any fun anecdote that you would like to share with us about your experience of teaching together?

A: Now Dimitri, I’d like to ask you what made you let go of your career in filmmaking to devote yourself to working with Barbara?

A: Was it an easy decision to make? Or did you have any doubts?

A: What I find interesting is that in the past interview you told us that this is not a path that requires leaving your life behind, yet in some way you did this? Do you care to share why?

A: When you joined Barbara did you aspire to become a teacher like her?

A: How did you become a teacher for The Kingdom of Light Teachings™ ?

A: What is one of the most exciting things in sharing these teachings?

A: What has been the greatest blessing you have received by being Barbara’s student and colleague?

A: Once again thank you both for you time and insights. I invite the readers of this blog to submit your questions and comments. In the meantime have wonderful “filled with light” week.

Angels and Your Spiritual Division

A most mysterious yet wondrous part of the human aura is the spiritual division. This division looks like a rainbow

“If you get a spiritual prompting, follow it. It is your destiny calling you.” – Barbara Y. Martin and Dimitri

What is Happening to Religion?

According to a recent poll 77% of Americans say religion is losing its influence in the United States, the highest