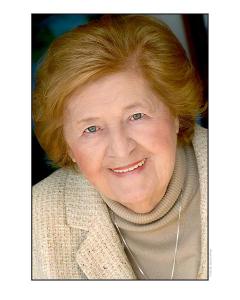 Who is Barbara Y. Martin?

Because of her exceptional spiritual talents, Barbara is affectionately known as “the Mozart of Metaphysics.” Born with the gift of seeing the aura in all its subtleties, Barbara was one of the first to lecture in-depth on the human energy field and is one of the foremost clairvoyants and metaphysical teachers working today.

Barbara’s adventure into metaphysics began at the age of three when she started seeing auras. She saw colors and energies around her family and friends as well as around animals, trees, and plants. It was a wonderful, idyllic time where she felt very close to God. Yet her family didn’t know what to make of her. Worrying about possible physical maladies, her parents took her to doctors and gave her glasses to wear—but there was nothing wrong with her.

Her clairvoyant abilities got her into trouble many times. When an aunt was late in arriving to a family gathering, little Barbara blurted out she wasn’t coming at all because she had died in a train accident. Her parents were horrified that she would say such a terrible thing. Yet the next day, they received the telegram with the tragic news that the aunt had in fact died in a train accident. In another incident when she was four, at the end of a church service Barbara was asked to kiss the hand of the officiate archbishop. Even though the archbishop was regal and commanding, Barbara saw grotesque colors in his aura and refused to come close to the archbishop. When her mother insisted, she cried out, “No! He’s a monster! He eats children!” Barbara didn’t know why these things were happening to her or how she knew these things; they just happened. After many similar incidents, she learned to keep quiet about what she saw and experienced.

Her family moved, and at change-your-aura, she found herself in Kansas City, Missouri. There, she expressed an interest in drama and joined a well-known acting troupe headed by Dorothy LaMoss. One day, Dorothy confronted her privately, saying, “You can see the aura.” Barbara didn’t even know that what she was seeing was called the aura! Yet that day marked the beginning of her spiritual training in the art of metaphysics. It turned out Dorothy was a hermetic scientist, and she could see the aura as well. She had ancient, handwritten books that were passed on to her from her mother and grandmother. These manuscripts described the aura in great detail, along with many other facets of the spiritual world. The young Barbara spent hours with Dorothy in her studio copying reams and reams of information—information that would one day become the foundation of her teaching work. Armed with this new knowledge, Barbara now understood and could interpret what she was seeing.

When she was a teenager, Barbara’s spiritual powers increased. It was at this time she began to become aware of the spiritual energy that is instrumental in changing and improving the aura. She also became aware of other facets of metaphysical world, including the ability to consciously travel to the spirit worlds. Yet, despite this intense spiritual inner life, she kept quiet about what she knew. After all, she was a teenager and was also going through the normal challenges of that stage of life. Instead, she involved herself with journalism and the entertainment business. At 19, she was producing variety shows for the USO that included such celebrities as Red Skelton, Mona Freeman, Susan Hayward, and many others.

While living in Los Angeles, she met Dr. Inez Hurd, a well-known mystic. Dr. Hurd helped prepare Barbara for the rigors of teaching and told her she would one day speak publicly on the aura and that metaphysics would become her career. This was a prophetic statement, because at the time very little was known about the aura. Eventually, Barbara found herself at a crossroads. Working in an insurance company and raising two children on her own, she had to decide if she would make metaphysics her life’s work. She had been helping people, but in an indirect way: if she saw something in someone’s aura that needed help, she would drop helpful hints. But word got out. Barbara began lecturing informally, but that soon turned into regular classes, workshops and consultations.

Thus began the career of a remarkable woman.

Her highly-anticipated new book Karma and Reincarnation: Unlocking Your 800 Lives to Enlightenment is being published by the prestigious Penguin/Tarcher. Her step-by-step self healing book The Healing Power of Your Aura has been endorsed by medical luminaries C. Norman Shealy and Dr. Richard Gerber, and the award-winning Change Your Aura, Change Your Life is now being published in 30 countries. She lectures extensively throughout the country and in Japan, appeared on national television, and has counseled numerous celebrities. She co-founded Spiritual Arts Institute, a non-profit spiritual teaching and publishing organization based in Los Angeles. Barbara has taught literally thousands of people how to better their lives by working with the aura and spiritual energy.

Today, over forty years later, Barbara continues to be at the forefront of metaphysics, writing books, teaching and lecturing. She currently lives in Los Angeles, CA.

Private spiritual counseling sessions with Barbara are for those who need guidance and direction with specific issues and concerns. Special attention is placed in helping you connect better with your own Higher Self to resolve personal conflicts.

Healing and counseling are available as either half-hour or one-hour sessions.

The Aura and Seeing into the Future

People have often asked if I can see future events in the aura. Sometimes, people want me to be their

The Aura of Relationships

Updated: February living-light, 2016 It goes without saying that relationships are a huge area of our lives. How we handle

The Aura and Spiritual Evolution

It is estimated that today one in three people are looking to better themselves through personal and spiritual growth. It